Laughter is the best Medicine!

Whether it’s a tiny twitch, a cheerful chortle or a gusty guffaw, we guarantee to put a smile on your face in 2017, with plays designed to send you away with a spring in your step and a song in your heart.

This will make you smile. A socialite’s wedding plans are complicated by the simultaneous arrival of her ex-husband and an attractive journalist. The play was written in 1939 and has been turned into two successful films, in 1940 with Katherine Hepburn in the lead and in 1956 as the musical High Society starring Grace Kelly.

The Taming of the Shrew by William Shakespeare, Directed by Jason Nash 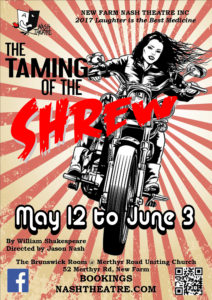 Padua’s a rough town to make a living, what with the competition between crime families. In the middle of it all is Baptista, her daughters, and their bar, maintaining a balance of power – as long as everyone pays their tab. Baptista’s youngest daughter Bianca is the object of everyone’s affections – but eldest daughter Kat stands in their way. Enter Petruchio, flush with his deceased Daddy’s cash, and ready to “wive and thrive”. Will his arrogant machismo “tame” Kat? Or is there more to this story than there seems?

Nash Theatre’s production of “The Taming of the Shrew” will reach for the top shelf and serve a mixture of disguise, seduction, and romance, blended with crime, revenge, and comedy; all soaked in whisky and served with a twist.

Preview/Final Dress Rehearsal, open to the public, May 12th. 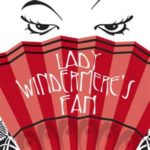 This, the first of Wilde’s social comedies, has all the ingredients that make his plays so delightful – mistaken identity, a lost child restored to the rightful parent, a conversation overheard while hidden, and a romantic triangle, all delivered with Wilde’s customary wit. You are guaranteed to be amused. 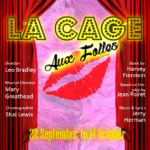 After twenty years of un-wedded bliss Georges and Albin, two men partnered for better-or-worse, get a bit of both when Georges’ son (fathered during a one-night fling) announces his impending marriage. Georges reluctantly agrees to masquerade as “normal” when he meets the family of the bride-to-be. But Albin has other plans, with hilarious results. Song and dance and a fabulous plot – what’s not to like? 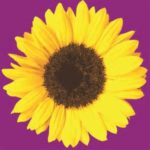 Last year’s fund-raising calendar, featuring local bridges raised a meagre £75.60 and was pretty ordinary. This year’s proposed calendar featuring local churches promises to be even more so. Based on the notion that sex sells, middle-aged Women’s Institute member Chris proposes to raise more money by changing the fund-raising calendar to one featuring tasteful photographs of nude WI members. Calendar Girls is an extremely funny yet moving play based on the true story of a group of WI members who posed nude for a calendar to raise money for the Leukaemia Research Fund.

Click to book and pay online (opens in a fresh tab)